Allan Sannier Is The Bubble

Silver Doubles on the Bubble

Kitai Doubles on the Bubble

Mateos Collects Another Scalp: Mortensen Out

Petrangelo Flips Out Of It

The third and final day of the PokerStars European Poker Tour €25,750 High Roller started with just 6 players, all eyeing a first place prize of €465,800.

It was an international slate of players, with six different flags in use at the final table. After just under 100 hands, the blue, red and white of the flag of New Zealand waved on top as [Removed:17] was crowned the champion, defeating Ole Schemion, Mikita Badziakouski, Max Silver, Oleksii Khoroshenin and Ramin Hajiyev.

Ole Schemion started out as the shortest player of the 6 and was the first to go as well. He got off to a good start finding kings, but his four-bet shove found no customer in Ramin Hajiyev who folded his ace-queen suited preflop. Picking up those chips wouldn't do Schemion any good, as he ran pocket jacks into the kings of [Removed:17] minutes later. A board full of blanks resulted in Schemion getting eliminated from the €25,750 High Roller, and he hopped right into the Main Event.

Five-handed play lasted several hours as no player was eager to risk all of their chips. Mikita Badziakouski would eventually be the unlucky one, falling in 5th place after losing ace-king to Max Silver's jack-ten preflop all in.

Max Silver himself would be next to go. He lost a huge coin flip with ace-queen versus the jacks of his roommate [Removed:17] as no queens or aces appeared as community cards. That left the amicable Brit short, and he busted not much later as he ran queen-nine into the ace-ten of Oleksii Khoroshenin.

Oleksii Khoroshenin, the EPT season 10 Vienna champion who qualified for this event the night before it started, ended up making his exit in 3rd place. He got involved with pocket threes in a slowly growing pot that saw Ramin Hajiyev hit a ten on the turn with ace-ten. The two got their chips in the middle with one last card to come and Khoroshenin failed to improve to bust out.

Just like that, the event was heads-up. The two remaining players, Ramin Hajiyev and [Removed:17], had plenty of chips, though. The play was extremely deep and the rail and commentators prepared for a long heads-up battle between two great players.

It would go differently, as just three hands later it was all over. Hajiyev first lost some chips in a hand that Yan had flopped a full house in, only to run a huge bluff the next hand that would not get through. Yan flopped top pair and rivered two pair on a board with straight and flush possibilities. Ramin Hajiyev went for it pushing all in with nothing but a missed gutshot draw. Yan asked for a count, thought about it for just a bit, and said "Call" to end the tournament. Not many tournaments end with a failed big bluff, but here in Malta, exactly that was the case.

It took the rail and players some time to realize it was all over, but the applause and confetti cannon would soon follow. [Removed:17] had won the PokerStars EPT Barcelona €25,750 High Roller for €465,800, after having already won the most money in the same event during EPT Barcelona only 2 months ago.

The €25,750 High Roller is in the books, but the EPT Malta continues. You can follow the Main Event and the upcoming High Rollers all week in the PokerNews Live Reporting section.

and was soon facing a four-bet by Hajiyev who made it 395,000. Yan called in position.

hit the turn and both players checked.

completing the board, Yan checked. Hajiyev shoved all in for 850,000 and the decision was on Yan.

When the counting was done, Yan had made up his mind it seemed as all of the sudden he said "Call."

And just like that, the event was done; [Removed:17] had won as Hajiyev had been caught running the biggest bluff of the final table.

Hands #94-95: Lucky to Get Counterfeited

Cards are back in the air for the heads-up between [Removed:17] and Ramin Hajiyev. 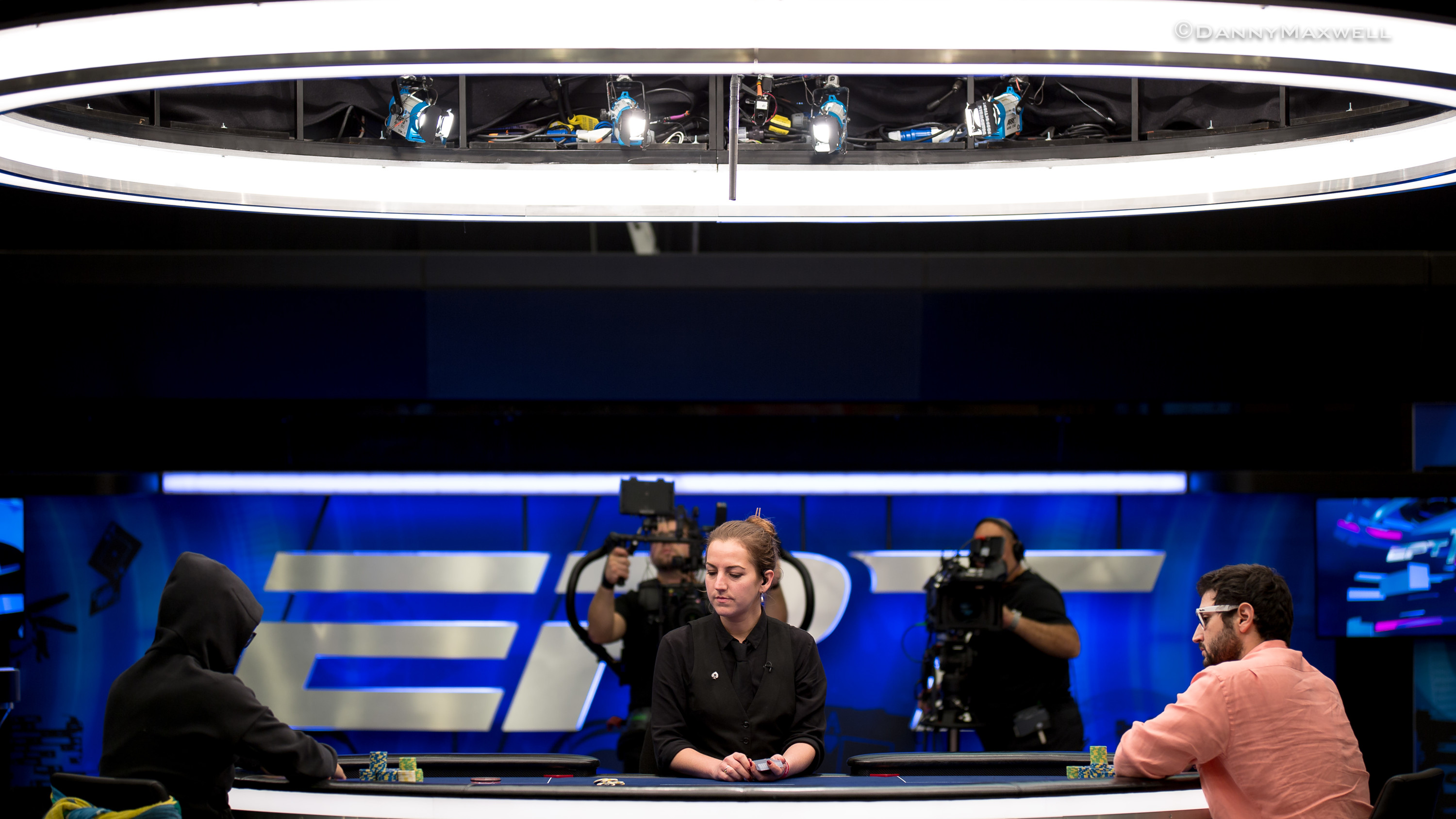 . Khoroshenin considered his options, then settled on a call.

, keeping Khoroshenin in the lead. Both players quickly checked. The

on the turn changed things dramatically, turning Hajiyev into a 86% favorite to win the hand.

Khoroshenin bet out 105,000 with his pair of threes. Hajiyev decided to raise with his turned top pair top kicker, making it 280,000 to go. After several minutes of thinking, Khoroshenin moved all in for 808,000 and Hajiyev snap-called!

Khoroshenin needed a three or five to survive, but the river

was neither of them. After the stacks were counted, it was confirmed Hajiyev had slightly more than Khoroshenin, ending the Ukrainian's run in 3rd place (€217,400).

Hand #86: Ramin Hajiyev limped in with the

Hand #87: We missed this hand because of a segment on the stream.

Hand #88: We missed this hand because of a segment on the stream.

in the small blind. Oleksii Khoroshenin raised to 65,000 with the optional

in the big blind and Yan bought a flop.

and both players checked. The turn was the

and Yan checked again. Khoroshenin bet 90,000 and took it down.

on the button. Ramin Hajiyev defended his big blind with

flop hit Hajiyev hard and he checked. Yan checked and gave up the

turn to a bet from Hajiyev.

on the button and made it 53,000, enough to take down the blinds and antes.

on the button and Oleksii Khoroshenin defended

Hand #85: Oleksii Khoroshenin limped in with

in the small blind. Ramin Hajiyev had

and made it 80,000 in the big blind. Khoroshenin folded his hand.

. Khoroshenin on the button asked for a count waking up with

. Khoroshenin then moved all in for 424,000 and both the other players folded.

The dealer didn't oblige and put the

on the turn and

on the river. That meant an exit for Max Silver. The remaining 3 players are now guaranteed €217,400.

Hand #78: In the first hand after the break, Ramin Hajiyev woke up with

under the gun. He raised to 53,000, and action got folded around to Oleksii Khoroshenin in the big blind. Khoroshenin found

and three-bet to 152,000. Hajiyev shoved all in and Khoroshenin snap-called.

With the board running out

, the cooler ended in Hajiyev's favor, doubling him to a million chips.

and the big blind gave up as well.