The players are now on their 90-minute dinner break, and the cards will be back in the air at 9:05 P.M. CET.

From middle position, Michael Pedley raised to 800. In the next seat in the hijack, Elliot Smith reraised to 2,500. Action folded back to Pedley and he made the call.

The flop came down

and Pedley check-called 3,000 from Smith. The turn was the

and both players checked. The river paired the board with the

Pedley turned over the

for jacks and sevens. Smith couldn't produce better and mucked his hand.

Just to make you jealous, we thought we'd give you a peek of the scenery we're staring at outside right now.

Still, there are plenty worse places to be trapped inside of.

The G Gives Some Back

Action folded to Yann Migeon on the button and he raised to 850. Tony G reraised from the small blind to 2,400 and Migeon called.

The flop came down

The turn was the

and both players checked to see the

"You have a king?" asked Tony G. Migeon shook his head and then Tony G tabled the

After that, Migeon showed the

for a Broadway straight.

. Giannetti check-called 1,300 from Harada and the dealer placed the

out on the turn. Giannetti bet out and wagered 2,100. Harada made the call.

The river was the

and Giannetti bet 3,200. Harada tanked and then made the call. Giannetti tabled the

"That's why he's at the [WSOP] final table," said Tommy Vedes after the hand.

Action on the Side

Well, things aren't getting any easier at Table 15. Patrik Antonius has just joined up in the three seat, sitting across the table from the murderers' row we mentioned earlier. Here's the lineup of familiar faces over there now: 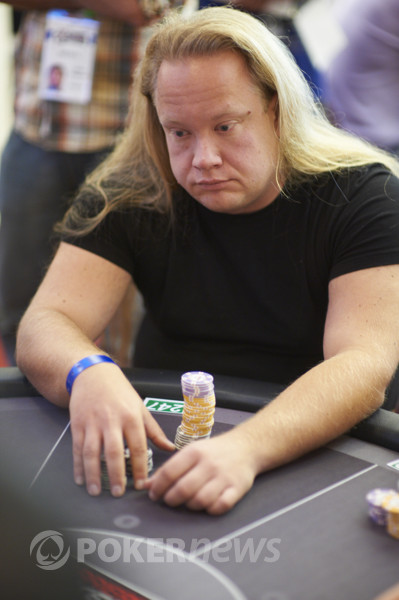 Not content to just take each others' chips, a few of them have pulled out the Euros for a little side action. Robert Mizrachi, Sorel Mizzi, and Bryan Devonshire have started up a game of "Lodden Thinks" -- or in this case, "Patrik Thinks". The first question was how much Antonius thinks Jani Sointula would need to shave his head. That's Sointula in the picture there, and you can't really tell, but that blonde hair goes a loooong way down his back.

Bryan Devonshire opened the betting at a €50,000, and Mizrachi made it 51. "Fifty-five," said Mizzi, and Devo quickly announced, "Sixty." The number continued to escalate as it was passed around the table, and it was Devonshire who broke through the triple-digit barrier. "All right, one hundred," he said reluctantly. Mizrachi, even more reluctantly, made it €101,000. Mizzi raised it one more time, and Devonshire and Mizrachi both liked the under on €102,000.

"Oh, ship the money!" Mizzi yelled, winning round one. For his efforts, he gets to pick the next question: "How many people have touched this exact €50 bill?"

I Got 99 Problems and My Chips Ain't One

All of the money went in on a flop of

and Govert Metaal had his opponent, Nikolay Volper covered, and he was also ahead.

Tony G Doubles to Over 80K

Tony G is always having a good time at the poker table and he's having an even better time now because he just doubled up. This is, of course, after sitting down and making a straight flush on the first hand.

On this hand, the board was

for a set of sevens and his opponent held the

for top pair and the nut flush draw.

The river landed with the

"What have you played, one orbit at this table, Tony?" asked Barry Greenstein.