One of the flagship events of the 2016 PokerStars and Monte-Carlo® Casino EPT Grand Final festival was calling all high rollers in the land to the tournament tables with the €50,000 Single-Day Super High Roller. At 5.30 a.m. local time, Ole Schemion and fellow German star Fabian Quoss remained to play for the title and a first-place payday of €933,200.

Schemion's run was extra special because he won the €100,000 Super High Roller the night before, topping a field of 61 entries in that event for nearly €1.6 million. He and Quoss are now guaranteed €713,100 in this event.

All players received 200,000 in chips to start, levels were 30 minutes each, and they had the option to reenter one time until the end of Level 15. Once the registration and reentry period was closed, the clock showed 70 entries, with 62 unique players and eight reentries. That generated a prize pool of just under €3.4 million, and the top nine spots would finish in the money with a guaranteed €98,480 waiting as a min-cash.

One year ago, the first-ever European Poker Tour single-day high roller tournament debuted at the Grand Final and it was Mustapha Kanit who emerged victorious after defeating a 66-entry field for a payday of €936,500. Kanit has been at it again here in Monaco, finishing second in the €100,000 Super High Roller to Schemion on Saturday night. But the magic of the Italian ran out just before the field was combined to the last three tables, paving the way for a new champion in this event.

John Juanda entered at the very last minute and didn't last one level, while international soccer star Gerard Piqué was never able to run up a stack either. Salman Behbehani had an unfortunate setup with middle set against top set versus Aidyn Auyezkanov, and PokerStars team pro Jason Mercier lost a flip with pocket sixes against the ace-queen of Byron Kaverman to go home well before the money.

EPT Season 8 Grand Final Main Event champion Mohsin Charania fell on the last three tables. He was joined on the rail by the likes of Thomas Muehloecker, Timothy Adams, Christoph Vogelsang, Mike Watson, Justin Bonomo, and Daniel Cates. Close to the money bubble, an all-in fest started and Bryn Kenney was reduced to only two big blinds. Kenney, the EPT Season 12 PokerStars Caribbean Adventure Super High Roller champion, fell in 11th place, and Max Silver bubbled when he three-bet all in with less than five big blinds with ace-deuce. Fedor Holz looked him up with ace-seven and the kicker held up.

Murad Akhundov was down to less than two big blinds when the money was reached and the final table started, but it was Steve O'Dwyer who ultimately exited in ninth place. After a series of all ins, he first lost king-four suited to pocket queens and then the remainder with eight-deuce against Akhundov's king-jack. With his min-cash, however, O'Dwyer took over first place in the current EPT Player of the Year rankings and bumped Mike McDonald into second place.

David Peters was the next on the rail after failing to improve with jack-ten suited against the queen-nine suited of Holz. Fellow short stack Michael Bonzon from Switzerland, who qualified through one of the live satellites, turned his ticket into a payday of €166,400. Bonzon pushed with ace-deuce suited and Quoss' king-queen spiked a queen on the flop.

Down to six players, Holz was still the chip leader, but Akhundov doubled up through him. Quoss was then responsible for the next elimination when Mikita Badziakouski three-bet all in with his short stack and ace-queen suited. Quoss had pocket fives and they held up.

It was Holz who fell next and the young German recorded his second high roller score here at the Monte-Carlo Bay Resort after a fourth-place finish in the €10,000 High Roller at the start of the festival. He also won a satellite to the €100,000 Super High Roller to play the big event at a huge discount. Holz was all in short with queen-jack, but Quoss and his eight-four suited saw a four pop up on the river.

Akhundov eventually exited in fourth place, losing a flip to the almost even-stacked Aidyn Auyezkanov with pocket fives versus king-jack when a jack appeared on the river. Auyezkanov doubled up once and then called the three-bet shove of Quoss with pocket tens. Quoss had king-nine suited and hit a king on the river to set up an all German heads-up duel. Auyezkanov finished in third place, which wasn't bad for his first-ever live tournament.

When heads-up play started, the two looked at the numbers, but Schemion didn't agree to the proposed deal and the two played on. After 45 minutes of one-versus-one action, no winner could be determined and the chips were bagged up. Now Schemion asked if Quoss was interested in a deal, but the answer from Quoss was clear as day: "No way!" 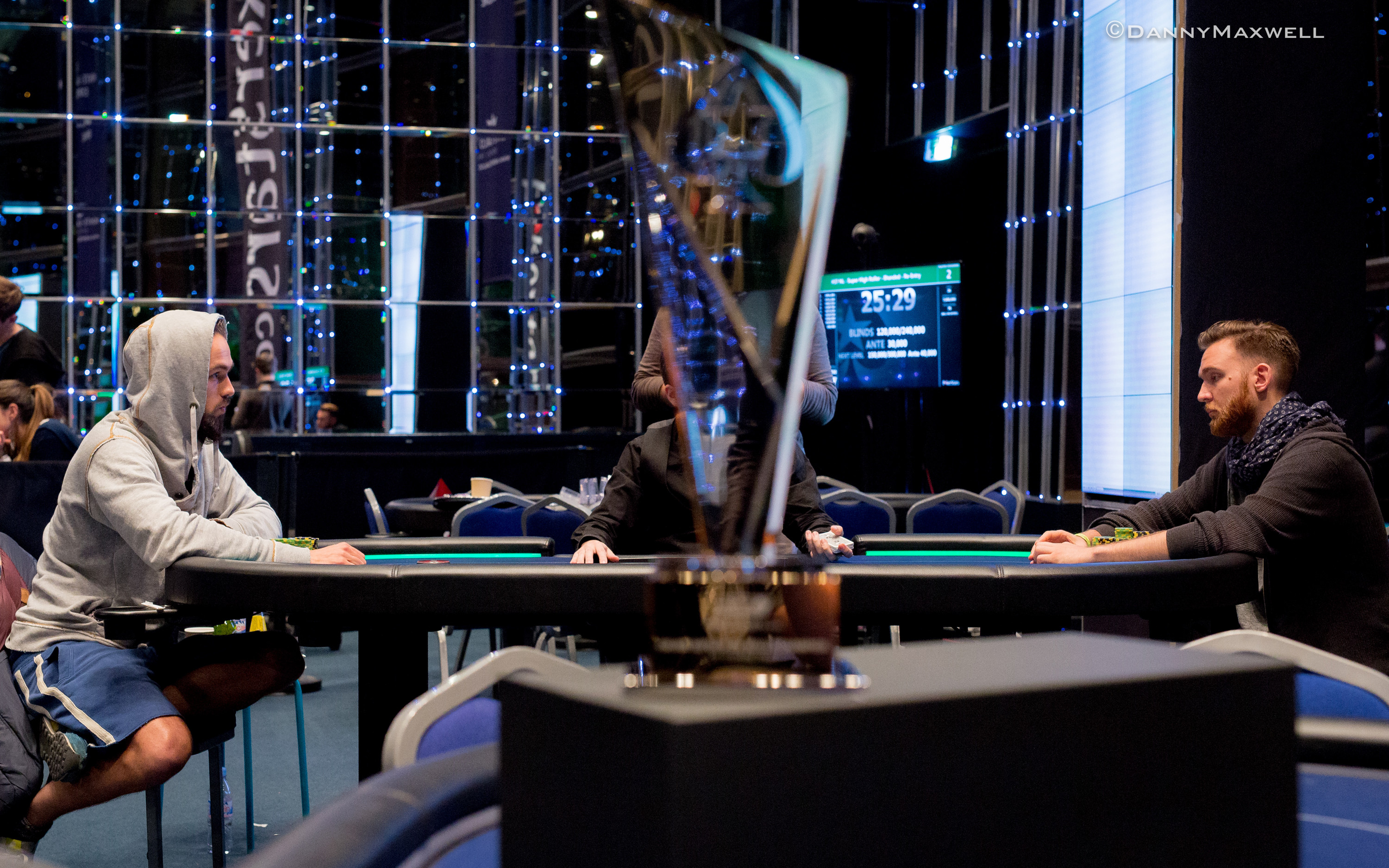 Schemion asked Quoss if he was still interested in a deal, but Quoss' answer was clear; "No way!"

And so the tournament will recommence tomorrow, and of course PokerNews.com will again be on site for all your updates.

Fabian Quoss stole the big blind twice to win some chips again and then Ole Schemion shoved first to act after finding an ace. Quoss peeked at his cards and quickly called with the better kicker.

After a board of

Ole Schemion limped in and Fabian Quoss checked his option.

and Quoss checked for the third time. Schemion pushed all in and Quoss went deep into the tank.

At one point he had his chips ready to commit, but after several minutes he decided to fold anyway. Schemion let out a big sigh again, and showed his

Fabian Quoss raised the button to 500,000 and Ole Schemion made the call from the big blind. Schemion checked on

Schemion fired another 900,000 into the pot after the

appeared on the turn. Quoss called and the

completed the board. Schemion checked and Quoss cut out 1.6 million to bet. Schemion thought about it for about a minute or two before calling.

but that didn't prevent him from losing the pot. Schemion tabled

and took down the big pot.

Quoss and Schemion About Even

Ole Schemion limped in from the button and Fabian Quoss checked his big blind. Quoss check called 250,000 on

completed the board and Quoss lead out for 1 million. Schemion let out a big sigh, and eventually mucked his cards.

Fabian Quoss raised the button to 500,000 even and Ole Schemion announced all in. Quoss made the instant call.

Schemion asked for a nine, and got what he asked for:

, though Quoss flopped a flush draw. The

on the turn was a blank and so was the