Heading into the third and final day of play, Italy's Dario Sammartino is in the best position to capture the €2,015,000, as he leads the final table of eight with 4.48 million. Others still in contention include EPT Malta High Roller champ Dzmitry Urbanovich, Poker Hall of Famer Erik Seidel, and 2014 WCOOP winner Fedor "CrownUpGuy" Holz, just to name a few.

Day 2 kicked off with a bang as both Stephen Chidwick and Jason Mercier fell in the first hand, albeit at separate tables. Before long, they had company on the rail in the forms of Antonio Esfandiari, Justin Bonomo, Philipp Gruissem and Leon Tsoukernik (who failed to make the most of his buy-in after winning it from Dan Cates).

Colman had kicker issues, and while he paired it on the

flop, McDonald also paired his queen. Colman began to get out of his chair after the dealer burned and turned the

, and then took his leave from the tournament after the useless

was put out on the river.

Others who fell on Day 2 were Steve O'Dwyer, Sam Trickett, Phil Ivey, Isaac Haxton, Daniel Negreanu, George Danzer (who was playing his first-ever Super High Roller), and Ole Schemion, the EPT10 Player of the Year.

Schemion actually fell in a controversial hand – the biggest of the tournament up to that point — in which some believe Sammartino nit-rolled the German wunderkind. It happened when just a dozen players remained and Sammartino opened the button to 55,000 in Level 15 (12,000/24,000/3,000). Schemion three-bet to 185,000 from the big blind, Sammartino called in position, and the flop came down

landed on the turn. Schemion bet 382,000, and again Sammartino called.

Things got really interesting after the

hit the river as Schemion moved all in for 1,121,000. Instantly, Sammartino let out a big sigh, moving his hands to his face like he couldn't believe what just happened.

"Pfff!" Sammartino sighed again. His pained face became visible after he moved his hands from his face to his hair and then up into the air. Sammartino didn't like what he was seeing, and made no secret about it.

Another couple minutes later, Sammartino still hadn't made up his mind. Schemion, still with a blank stare and arms folded, didn't flinch when Sammartino waved his hand in front of him to try to get a reaction.

"Ole, do you know what I have?" Sammartino asked Schemion after waving his hand in front of his face to garner a reaction. "Second nuts, I mean third nuts?" he corrected himself. The third nuts would be pocket jacks, but was it possible the Italian was tanking for this long with the second-best full house?

After another couple of moments, Schemion asked for the clock. The floor informed Sammartino he had one minute to act on his hand. With about 20 seconds left in the countdown, Sammartino grabbed a stack of T25,000 chips and moved them over the line to indicate a call for his tournament life.

, just about 100% sure he was going to win the biggest pot of the tournament and continue as a big chip leader. To everyone's surprise, though, the aces weren't good. Sammartino showed the

, indeed having the third nuts, and now it was Schemion doing the sighing. The German's face was that of disbelief, partly because he was surprised by such a long tank by Sammartino and partly because after all the tanking he thought his hand was good.

After all the counting was done, Schemion was left with 26,000, which would disappear in the very next hand.

Here's what Sammartino had to say about the hand after the day was done.

A short time later, just 10 players remained, which meant they were on the money bubble. That is when Piotr Franczak suffered a particularly bad beat to finish as the bubble boy. 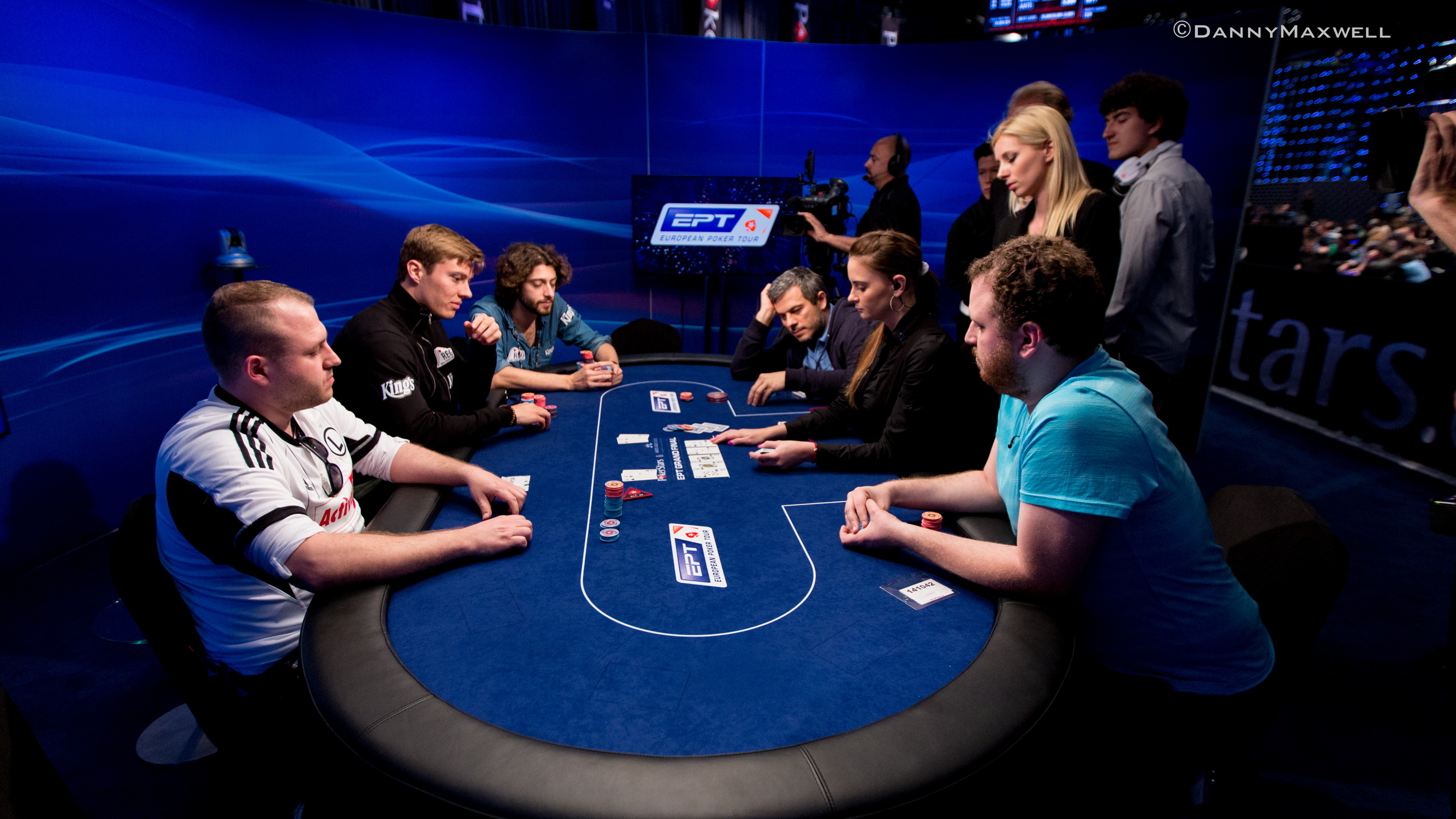 At that point, the final nine players combined to the final table to play until one of them fell. That man ended up being Vladimir Troyanovskiy, who took his leave in ninth place for €199,620 after getting his aces cracked by Igor Kurganov's pocket kings.

The final eight players will return at 12:30 p.m. on Saturday to play down to a winner. The final table will be broadcast on eptlive.com on a one-hour delay, and of course PokerNews will be providing live updates right here in our live blog.

An extensive recap of todays action will follow later.

Igor Kurganov opened under the gun for 95,000 and action rapidly folded to Vladimir Troyanovskiy in the small blind. The Russian high roller three-bet to 235,000 and the big blind folded.

Action was back on Kurganov and he four-bet to 475,000. Troyanovskiy shoved all in not much later for 1,540,000, Kurganov instantly called.

The flop was a harmless

on the turn did make a huge difference though, doing to Troyanovskiy what Troyanovskiy himself did to Franczak just minutes ago.

on the river was a blank and just like that, the tournament was down to it's official final table of 8. Seiver, the absolute short stack, just received a €62,180 unexpected present.

With the players now in the money, play continues till one more player is lost and the final table of eight is set. The remaning nine players are battling it out for the following prizes:

In the first hand back from the break, action folded to Vladimir Troyanovskiy on the button and he raised to 500,000, essentially moving all in. Piotr Franczak, who if you recall made a name for himself at the EPT Malta after notching several big score, was in the big blind and wasted little time in calling off for 340,000.

Franczak woke up with the goods, and he was primed to double even after the

flop. Unfortunately for him, disaster struck when the dealer burned and turned the

. Franczak still had outs, but he missed as the

blanked on the river.

"Oh my god, I had a three," someone at the table admitted after the hand. "It was a one outer."

It was a particularly brutal beat for Franczak, who missed out on a minimum €199,620 payday.

Chip Counts in the Break

Ole Schemion Sent to Rail After Trial By Fury

It was beginning to look like Ole Schemion was a dead cert for the final table with a performance that made him look in complete control. Then a hand that changed everything, and would result in the German heading for the rail, as the PokerStars Blog reports.